I returned to D.C. in April to run the Runner’s Rite of Spring, and the whole weekend was a cold front. Surprise, surprise…it seems like whenever I run here, the weather is some extreme or another. Alas, I was excited to return to this historic road race for the second year in a row. I arrived on Friday and took time to explore my old roots and catch up with friends and former coworkers. 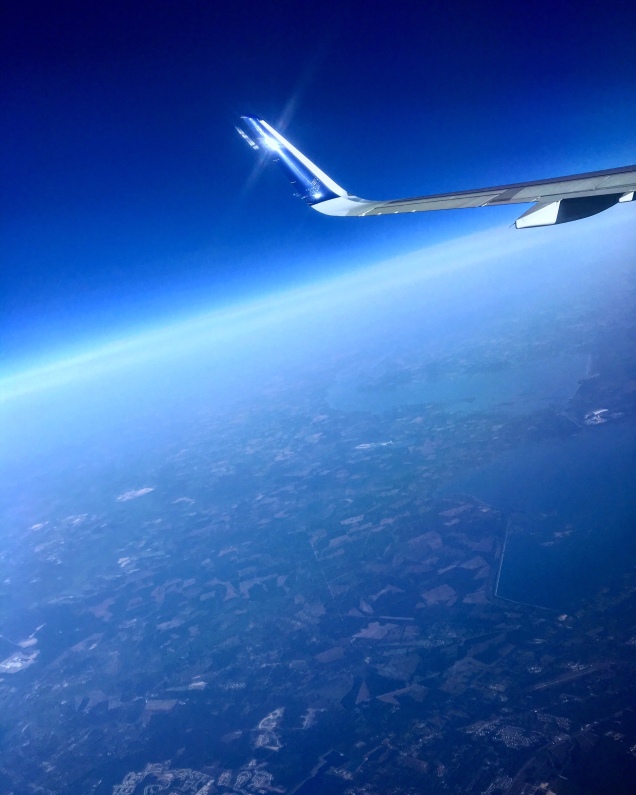 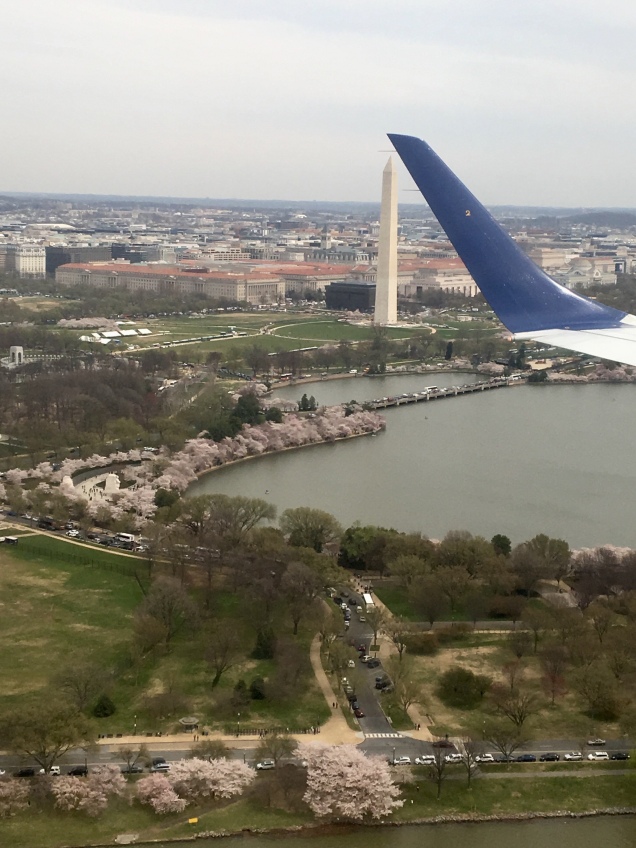 Saturday was expo day, and I wound my way around the National Building Museum checking out the vendors. 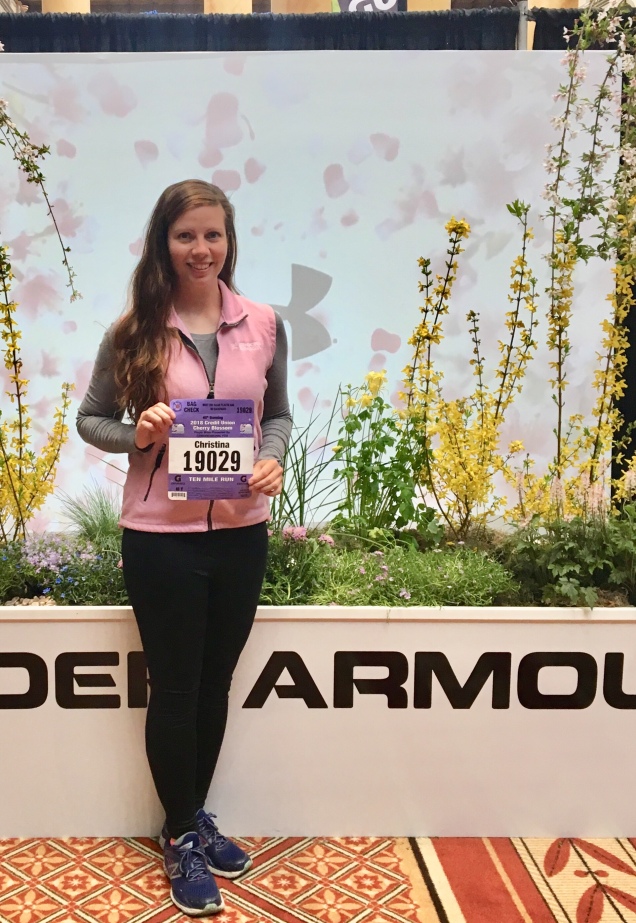 I ran into my Sparkly Soul sista, Caroline, and got our obligatory pre-race picture!

I stayed just a short time at the expo. The cherry blossoms, which were still surviving the cold, were calling my name! I hopped on the Metro and went to the tidal basin…along with 48293 other tourists. 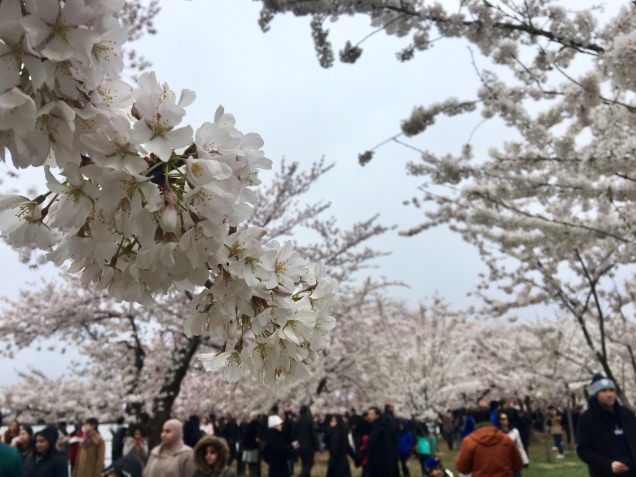 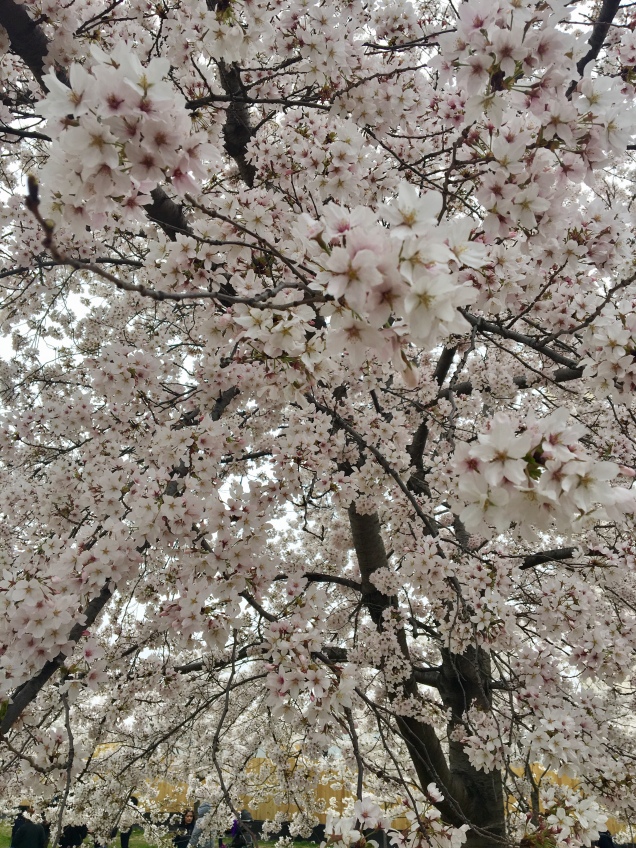 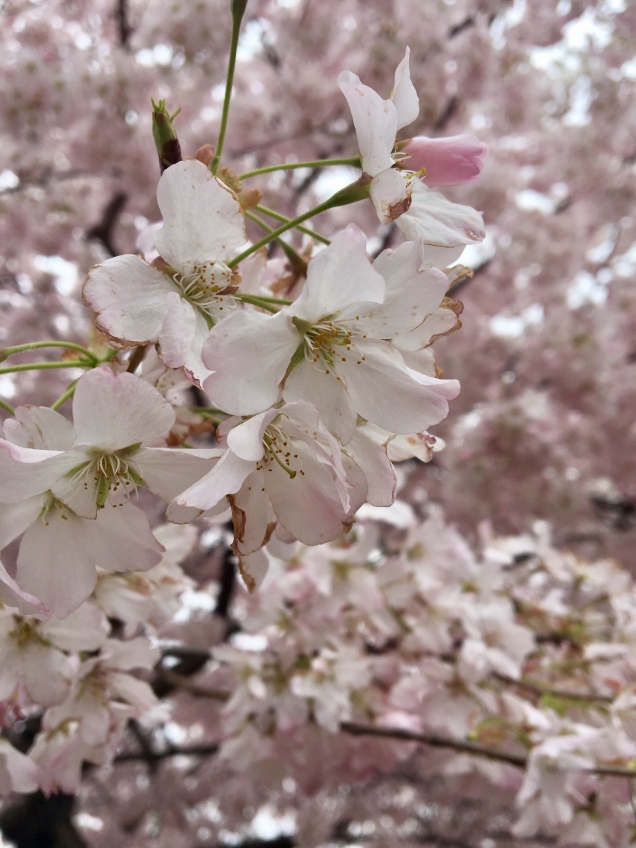 Sunday was race day, and I am SO glad that I kept my cold weather gear: the temps at the start line were frigid..26 degrees with 12 mph winds. It. Was. Miserable. My hands and feet went numb within the first five minutes of being there, even with gloves and socks on. I lined up in the Purple Corral around 6:45, bundled up like an Eskimo with my space blanket and huddling toward the ground to get a break from the wind.

My feet were tingly and painfully numb as I waddled closer to the start line. Once we launched, I tried to keep some semblance of form that represented running. I thought about peeling off the course at Mile 2 for the med tent because it was that unbearable, but pushed along.

(I later discovered that my first two miles were worlds apart from last year…10:45 and 11:37 respectively. How the hell did I manage that?!)

I didn’t pull out my phone for pics until halfway through, just like 2017. Rounding near the Jefferson Memorial, the blooms greeted us like a long lost friend. 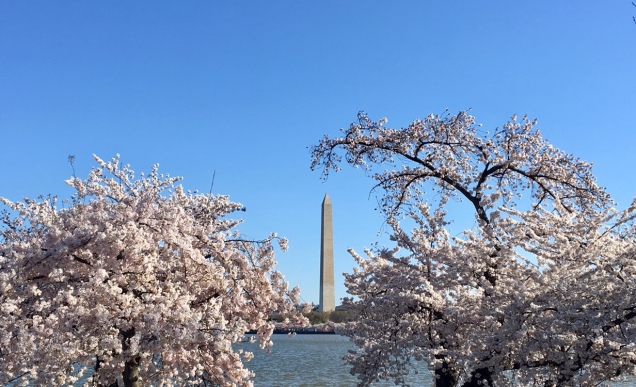 My times dropped to around 13, 14 minutes per mile…but it was worth it!

Heading into Hains Point, I developed a fartlek strategy: run where the sidewalk dipped inward toward the river (so I could actually run run with space), and walk when it swung back in. Walk the water stops. Take pretty pictures. That was miles 6-9-ish. 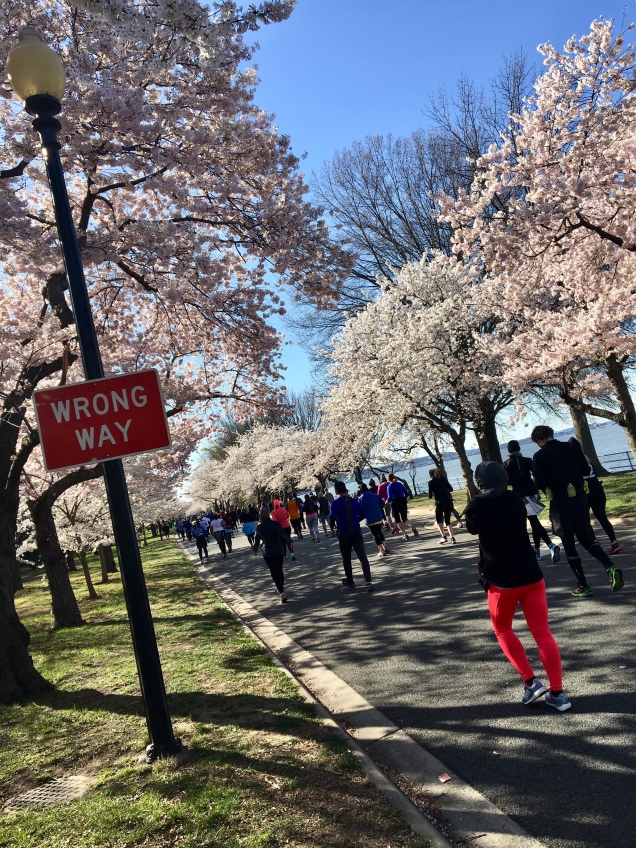 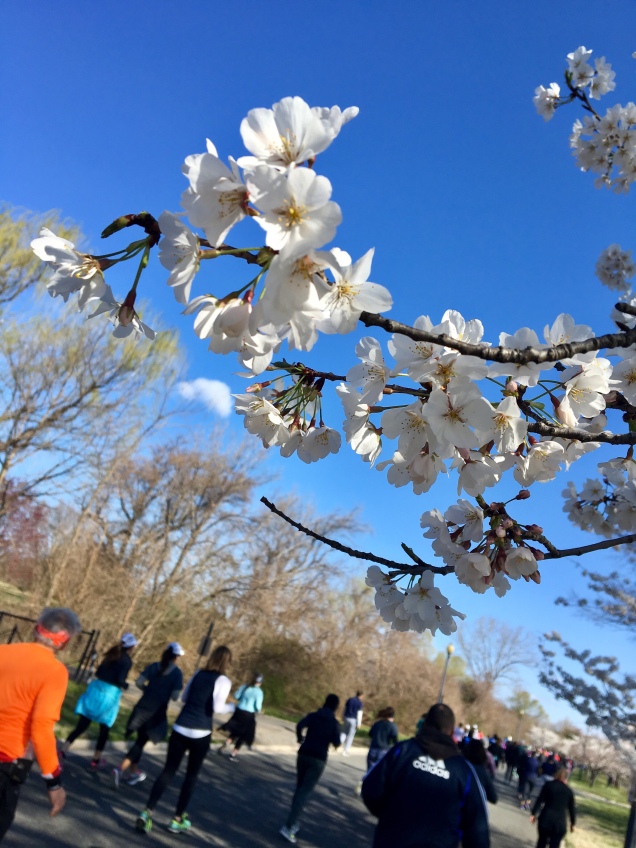 By mile 7 or so, my body had been feeling relatively normal for a few miles. When we looped around the Point and headed back to the city, the last two miles were all headwind. (For those that have run Marine Corps, this is miles 12-14.) The cold feelings returned and I was determined just to get to the finish.

Oh, and take another picture:

I kept one eye on my Garmin those last two miles. My 2017 PR was a 2:10:05, and my current time was getting reeeeeal close. Beating that previous PR would give me such a boost since my attempt to PR at the Fairy Tale Challenge had failed and I still felt like crap for being unable to do so after racing the same courses for years.

Hitting mile 9, I was hovering around a 1:57. The screams and cheers of the final mile propelled me up the final hill/last 400m and down to the finish. 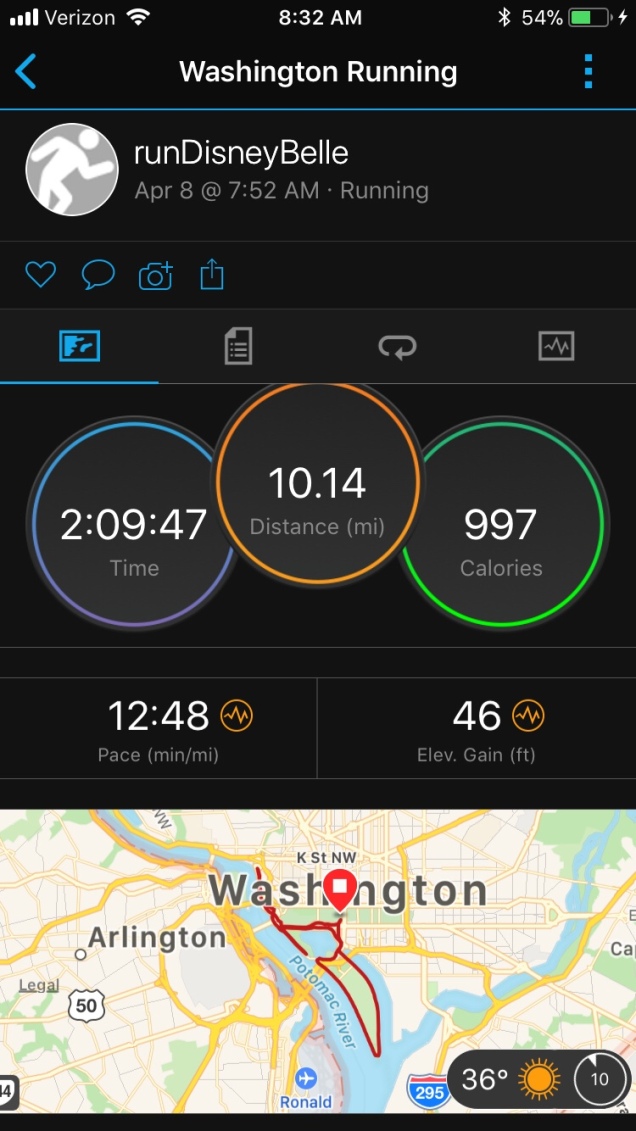 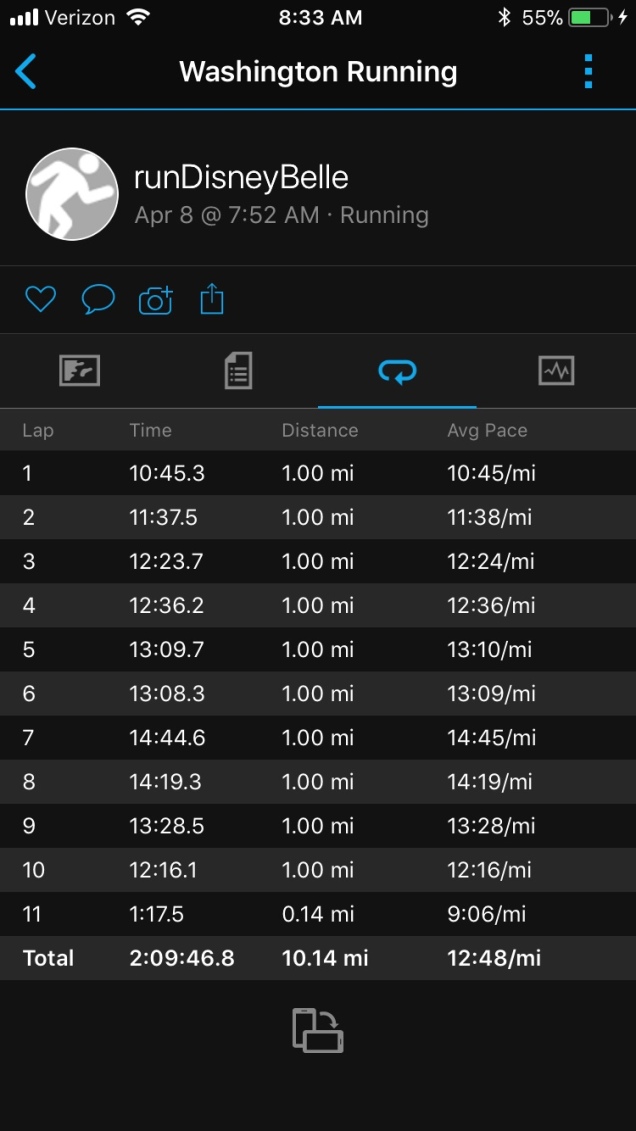 Look at those negative splits in the last few miles! 😊😊

I retrieved a space blankie, my medal, and snacks. I walked a long, cold walk to Prêt a Manger on F Street to get something warm to eat and to thaw out. 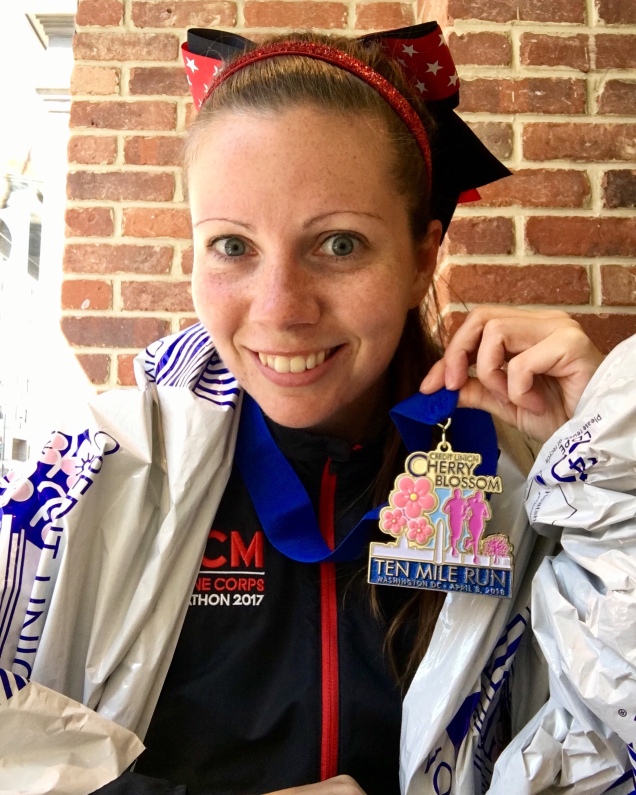 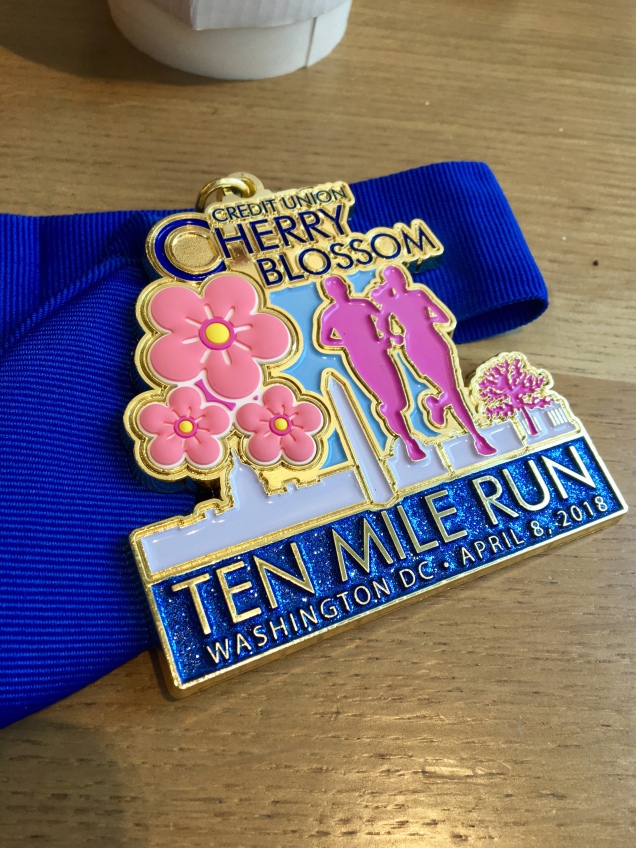 I then traversed to Georgetown, space blaket a-flying, and met with my Twitter friend, Amy, for victory cupcakes and coffee at Baked and Wired! 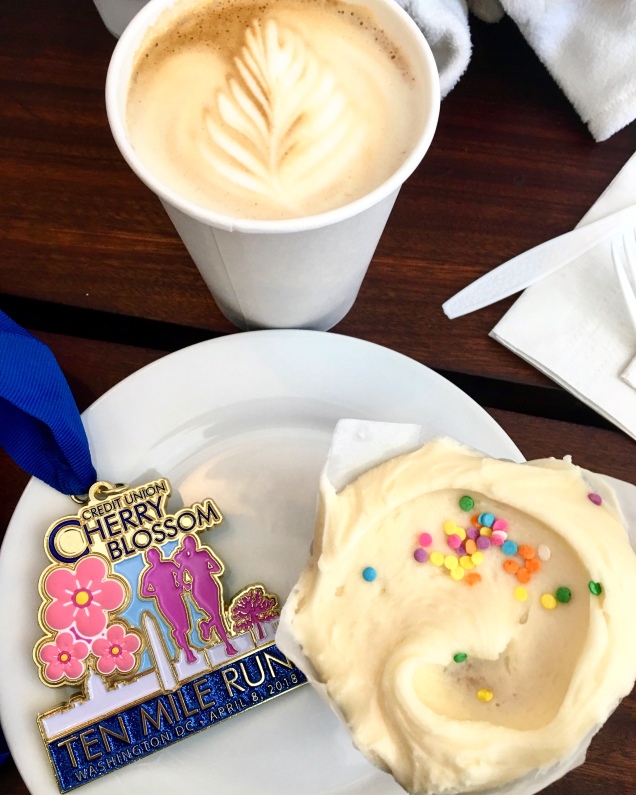 When I descended the plane the following day, I was greeted by my boyfriend, Michael, holding a name sign he designed and decorated (and drowned in glitter for!) and a branch of cherry blossoms!! 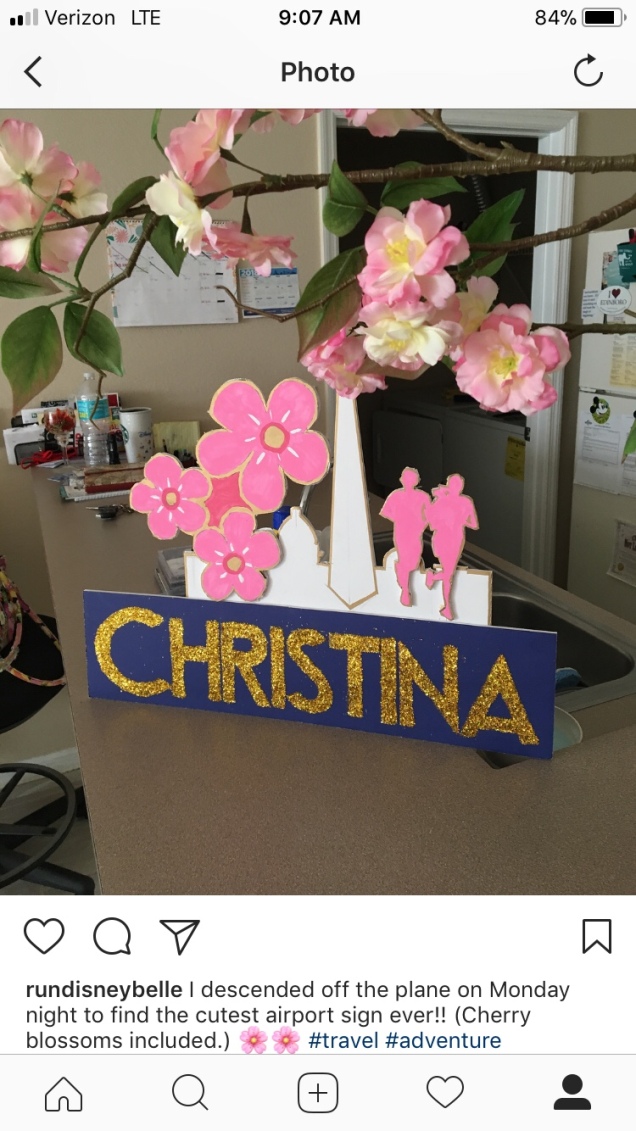 Welcome to the Glass Slipper Chronicles! I'm Christina, and I'm a runner {13.1x10||26.2x5} who loves photography, coffee, theme parks, storm chasing, traveling, and having adventures. I'm the author of the Princess Half Survival Guide, and a connoisseur of runDisney, sparkly bows, Simpsons quotes, and coffee mugs.